About a month ago I was the matron of honor in a close friend’s wedding, which meant I also got the throw her bridal shower – which I had NEVER done before! In fact, I’d barely even gone to any bridal showers! So what’s a girl to do?

I searched through tons of bridal shower boards and suggestions until I found a mix of fun ideas that were a good fit for the bride-to-be. *Note: I had the bride’s camera for the shower, so don’t have the actual pictures yet – just my inspiration photos

First up: Decorations! I picked a blue/teal/yellow theme

Love these Poms! I picked up a multi-color tissue paper pack from Target, then followed the tutorial from MarthaStewart. Very simple and super cute!

These heart streamers are so whimsical! I bought a music book full of love songs, and cut them out with a scalloped scissors, adding an occasional yellow heart as well to stick with the theme. They definitely helped set the mood for the party

The beverage table was dressed up with these cute LOVE letters, in blue, white, teal, & gold. Simple enough to take wooden letters from any craft store and wrap with yarn until you’re happy with the design!

I didn’t want to do all traditional (boring) bridal shower games, so I was pumped when I came across this fun take on a he said/she said game, called Staches & Tiaras! I made one mustache and one tiara for everybody, then read off the answers to a silly questionnaire I made up. They had to guess if it was the groom’s answer (put up the mustache) or the bride’s (wear the tiara). It was a big hit and people wanted to take home the props! 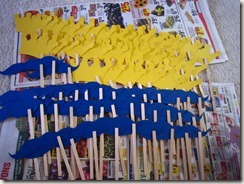 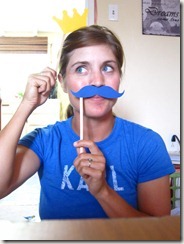 I love to bake, so I made an assortment of cookies (snickerdoodle, chocolate dipped spritz, peanut butter) and packaged them up with adorable labels I made using glitter scrapbooking paper, with a thank you note attached. They ended up quite similar to these:

I have a ton more ideas bouncing around in my head after putting together this bridal shower, so feel free to ask if you feel as lost as I did in the beginning – I’d be glad to help!

Question for readers: Have you ever hosted a shower/party before? Where did you get your ideas?